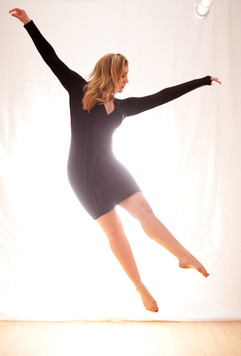 Kimberleigh A. Holman, choreographer and lighting designer, is Artistic Director of Luminarium Dance Company. She graduated from Mount Holyoke College with a degree in dance, having also had the opportunity to study with several prominent lighting and sound designers. Since founding Luminarium Dance Company with Merli V. Guerra in 2010, Kimberleigh has been invited to show her work at venues including the Boston Center for the Arts, the Center for Arts at the Armory, mobiüs, Mount Holyoke College, the Arsenal Center for the Arts, OBERON and in many more great New England spaces. Holman is passionate about community-based projects; she, with Luminarium, was awarded the President’s Innovation Fund award for an outreach program merging the company with the Boys and Girls Clubs of Boston in 2011, and dreamt up the 24-Hour ChoreoFest in 2012 to build and develop community.  She is currently working on a project with the South Boston Community Health Center’s Young at Arts program. Kim’s most recent projects include Luminarium’s Mythos:Pathos, in addition to working on a piece in collaboration with a composer at Ithaca College, creating new work as a guest artist at Providence College and choreographing at Babson College. Holman often merges her interest with lighting into her choreography; she takes satisfaction in using traditional lighting elements in very untraditional ways. Founding a unique environment for each new work she creates with a tailored sound score and active lighting make her finished pieces feel alive. The most central idea to her philosophies as a choreographer is that the work needs to be visual and accessible, while leaving a viewer with something they can take away from the performance: an invisible memento.